There are seven years since four good friends took the road for visiting the famous Romanian Monasteries of Moldova and Bucovina. They made only one mistake, they traveled by car. In almost one week we saw or visited twenty places of workship. This post is the first from a series. The photos are …less quality but one can get the big picture.

Sfantul Daniil Sihastrul, the person from the title (I am using his Ro8manian name, because is easy to locate the place if you ever plan a trip) was a pious and a blessed human being. It’s been said that Sf. Daniil had the Holy Spirit by his side. He used to heal sick people by prayers. It was 1451 A.D. when Sfantul Daniil also made an important foretelling to Stefan the son of Bogdan II the ruler of Moldova in that time. It is normal that the son to succeed the father but that was not the case as Bogdan was murdered for his royal throne by Petru Aron. To make the story short, Stefan bacame in 1457 Stefan the Great and the Saint whose reign was one of the most important in the Romanians’ history. 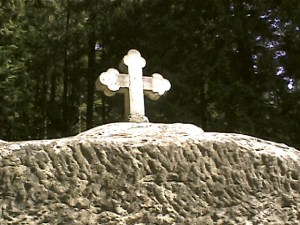 The cell or cave from the picture is the place where, Sfantul Daniil Sihastrul lived twenty years. Because of his fame, he chose to live in solitude and he spent more time for prayers. He caved the stone by himself. They say it took him 11 years to carve 9.25 m x 2 m.
Voronet Monastery hosts Sf. Daniil’s remains which makes the subject of another pilgrimage. On December 18 the Orthodox Christians celabrate him as a Saint.